© Licensed to London News Pictures. 18/03/2019. Plymouth, Devon, UK. “Messenger”, the largest bronze sculpture ever to be cast in the UK, is transported through Plymouth city centre before being installed at the Theatre Royal in Plymouth City Centre. It was brought into Plymouth by barge across Plymouth Sound. Weighing in at nine and a half tonnes with a height of seven metres (23ft) and nine metres (30ft) wide, with a volume of 25.6 metres cubed, “Messenger” will be the size of two double decker buses and is the largest lost-wax cast bronze sculpture ever to be cast in the UK, a painstaking process that has taken over two years. “Messenger” is the work of the acclaimed sculptor Joseph Hillier and has been created using 3D scans from the body of a young actor in mid-performance in Theatre Royal Plymouth and Frantic Assembly’s production of Othello in 2014. A monument to the physical expression of theatre, “Messenger” is a movement suspended in time that embodies the energy and creativity at the heart of the Theatre Royal and cultural life in Plymouth and aims to celebrate creativity as a dynamic catalyst for change. Plymouth is undergoing massive regeneration and the installation of the sculpture is is a prelude to the Mayflower 2020 celebrations. Messenger was cast at the Castle Fine Arts Foundry in the Welsh village of Llanrhaeadr-Ym-Mochnant, using the ancient technique of lost wax casting. Made from over 200 bronze panels, each section of the sculpture was cast individually before being welded together by over 30 master craftsmen at the foundry. Photo credit: Simon Chapman/LNP 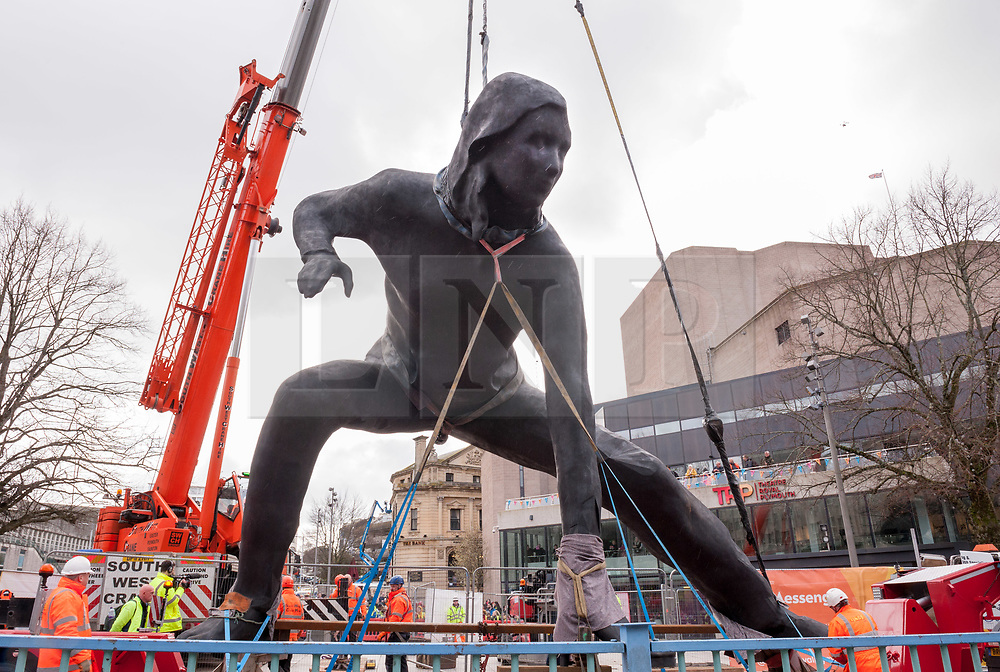